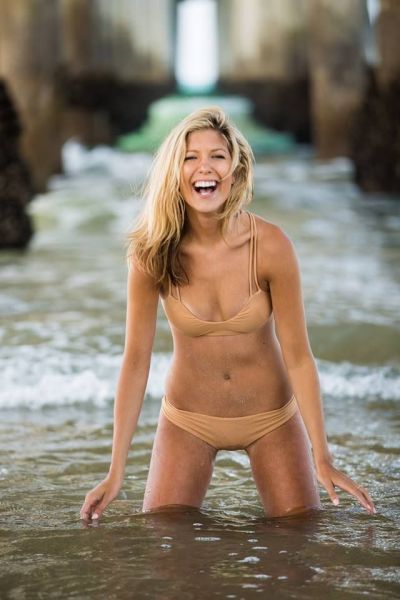 I haven’t seen Hana Cookson in a couple of years.  She is always one of my favorites!  One of last times I saw her she was headed off the Air Force.  Our Country’s loss things didn’t work out.
So tonight we were catching up and I asked her what she is doing.  She and her friend, Kylie Williams, started Almost Naked Swimwear.  OK, this summer is almost about to end, but you have to check out their really cute bikinis and and one piece swimwear. 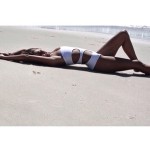 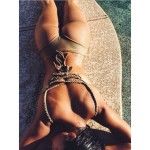 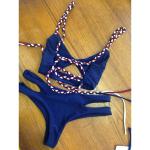 Check them out at:

In a video posted online by GoPro, owner Kai Holt explained how Karma, who he has owned since he was about a week old, learned to surf.

“He fell in the pool one day and just started swimming,” Holt said. “And I was like, ‘Oh, he can swim.’”

“He followed me into the water, jumped on the board, paddled out and got his first wave at Baby Makapu’u. Everybody was trippin’. It is pretty funny to watch, like he knows what he’s doing.”

For surfers who ride big waves, perhaps the most enticing, terrifying and humbling spot on Earth is a sunken island in open ocean 100 miles off the Southern California coast.

Cortes Bank was a California channel island 10,000 years ago, when the Ice Age lowered the sea level by 400 feet, journalist Chris Dixon says in his just-released book, “Ghost Wave: The Discovery of Cortes Bank and the Biggest Wave on Earth.”

Today it’s a hidden island, a sea mount where the ocean floor rises from a depth of 6,000 feet almost to the surface. In 1990, Dixon writes, Orange County surfers Bill Sharp, Sam George and George Hulse set out with San Clemente-based surf photographer Larry Moore from Newport Harbor in a 29-foot-long boat. They were on a secret mission to see whether a large swell that had passed Hawaii would produce large, surfable waves at a reef that rises to within 15 feet of the surface in open ocean, marked only by a warning buoy.

Now, Cortes Bank is a fickle, rarely ridden, world-famous surf spot that can be spectacular when conditions are right. Dixon, a former Orange County resident and a former editor with Surfer magazine, now lives in Charleston, S.C. He was in San Clemente on Friday to sign books and describe how the story of Cortes Bank came together.

Since 2008, when Dixon wrote a New York Times piece about the bank and became obsessed with it, he has learned there’s more to the story than surfing:

• In 1846, the crew of the USS Constitution, on its only sail down the California coast, apparently saw waves there and reported the open-ocean hazard, Dixon said.

• In 1855, a clipper ship, the Bishop, may have struck the pinnacle of Cortes Bank, which became known as Bishop Rock.

• In 1985, the aircraft carrier USS Enterprise hit a reef 100 miles off San Diego. Dixon later confirmed it was Cortes Bank.

The book describes how, in 1985, a newspaper article about the Enterprise incident caught Moore’s attention. As Moore, then photo editor at Surfing magazine, researched the sea mount, he became convinced it had potential for surfing. In 1990, he and Cessna pilot Mike Castillo flew over the bank during a giant swell and were shocked at what they saw. Castillo turned to Moore and said, “If anyone ever tries to surf out there, they’d better take the … pope along to pray for them,” Dixon told an audience Friday at the Surfing Heritage Foundation.

About Hawaiian: The Legend of Eddie Aikau

I got the call from Jeff Divine, the venerable surf photographer and photo editor of The Surfers Journal in San Clemente, California.

“Hey Sam, Jeff said. I was cleaning out my garage, going through some stuff and found something you might be interested in.

Jeff knew that at the time I was producing and directing a documentary film about the life and times of Eddie Aikau, the iconic Hawaiian waterman best known for the namesake big wave event held in his honor at Waimea Bay and the even more iconic bumper sticker Eddie Would Go. Profiling a character like Eddie Aikau was proving to be a challenge, the old adage of when choosing between the truth and the legend, always print the legend

firmly in mind as something not to do here. Aikau, who died in a rescue attempt following the capsizing of the Polynesian voyaging canoe Hokulea in 1978, is one of the best-known, least known figure in surfing history. 28 years of The Quiksilver in Memory of Eddie Aikau big wave riding event at Waimea has seen to that, as has the ubiquitous bumper sticker. But aside from those sincerely respectful but ultimately promotional acknowledgments, the surfing world knew very little about Eddie Aikau: in the 35 years since his death no major surf publication had ever run an Aikau profile. It was as if the surf media was satisfied with letting Quiks ads and promotional material establish and maintain Eddie’s legacy. The trouble with that was that Quiksilver, however well meaning, couldn’t find much to work with. Apparently only a handful of Aikau images seemed to existover the past two and a half decades the same three or four photos appeared on posters and adswhile very little had been added to the standard narrative. Aikau, the top young Hawaiian big wave rider who became King of the Bay, Waimea’s first lifeguard, and doomed crew member of the Hokulea, which in March of 1978 capsized in heavy seas off Molokai while attempting to sail to Tahiti. That was about all anybody seemed to know about Eddie Aikau all anybody seemed to need to know about Eddie. But if I were really going to bring Eddies story to life, to go beyond the posters and bumper stickers, I’d need more.

Which is why I drove right down to The Surfers Journal office to meet with Jeff Divine, who would not have called me if he had not found something great. And great it was. While cleaning out a old box in his garage Jeff had discovered the contents of the desk hed sat at when working as the photo editor of Surfer Magazine over 20 years ago. One item was a cassette tape that, according to Jeff, had arrived at Surfer in 1976 but had never been listened to. Written on the tape, faded now, were four names: Eddie, Clyde, Kimo, Bradshaw. We scrounged up an old boom box from the warehouse (who has a cassette deck these days?) popped in the old tape and stood back in wonder. Here was Eddie Aikau and Clyde Aikau, being interviewed by equally legendary Hawaiian big wave rider Kimo Hollinger (with assistance from a young Ken Bradshaw) about the upcoming 1976 North Shore pro season. Most notably what the Hawaiian reception would be like for the returning Aussie pros like Rabbit Bartholomew and Ian Cairns, who, following their triumphant performances the previous winter, were the current media darlings.

January 19 2014, Jaws was huge, clean and barreling.   As big it was, some were still catching Pe’ahi by paddle.

If you haven’t seen the drone footage of Pipeline, it is excellent.  Pipeline Winter 2013 Shot from a Drone

When the guy who’s at the forefront of bring the paddle back to Jaws is on a tow-line, Peahi has to be huge. The monster swells pumping huge surf to the entire north facing surf spots hits the Islands of Hawaii during the January 20 week of 2014.  Here Ian Walsh is riding monsters at Jaws.

Top two photos are from January 17, 2014 at Jaws.  That Friday opened up the season with the amazing potential of Jaws delivered.  Jamie O’Brien and Kalani Chapman captured above.

Previous Update: PipeLine may reach 40 to 50 feet.  With pictures.  Read more at NorthShoreHawaii…

Brazilian surfer Carlos Burle may have set the world record for the biggest wave ever surfed after riding an estimated 100-foot wave off the coast of Portugal.

Initial estimates of the wave’s height put it taller than 100 feet, thus taller than the record set by Hawaiian surfer Garrett McNamara in January. McNamara caught a 78-foot wave at the same location in November 2011, according to Fox News. McNamara’s ride was determined to be a record by the Billabong XXL Global Big Wave Awards.

Burle was with fellow Brazilian surfer Maya Gabeira, who was knocked unconscious by the strong waves and nearly drowned, the Telegraph reported. She was taken to the hospital and is recovering, although she sustained a broken ankle.

“It was luck,” Brule told Surfer Today. “We never know when we will be catching the wave. I still hadn’t surfed any wave and everyone had already had their rides. Maya almost died. For me, it was a big adrenaline moment to get back there after what happened.”

Carlos Burle wave is the last wave of the video.

A film by Hélio Valentim

Giant waves with 40 to 50 foot faces are starting to roll into north shore beaches.

The National Weather Service says that an intense storm northwest of the Hawaiian Islands triggered this super swell.

Waves from the storm have been rapidly building throughout the morning and should peak this afternoon and hold strong well into the evening.

The National Weather Service is still forecasting waves with 40 to 50 foot faces for north shores, with west shore waves possibly reaching 20 to 30 feet.

West shores of the Big Island may have waves of 12 to 18 feet.

The National Weather Service says around 9 a.m. Buoy1, which measures open ocean swells northwest of the Hawaiian Islands, measured an ocean swell of 31 feet at 17 seconds, that translates to 50+ feet on the north shore around 7 p.m. tonight.

Currently a high surf warning is in effect until 6 a.m. Friday for the north and west shores of Niihau, Kauai, Oahu and Molokai, the north shore of Maui and the west shores of the Big Island of Hawaii.

The wave heights could be the largest we have seen in decades. “Back on Feb. 23, 1986 we saw swell heights of about 30 feet with periods of 20 seconds and what that translates to is really big surf, over 50 feet and that is similar to what we seeing today,” said Robert Ballard Meteorologist at the National Weather Service.

The high surf and dangerous currents will make it extremely hazardous to approach the shoreline and result in significant injury or death. Significant coastal inundation and property damage is also possible, so road closures may be likely. Large breaking waves may also make it impossible to enter or leave harbors, including Kahului Harbor on Maui and Waianae Boat Harbor on Oahu.